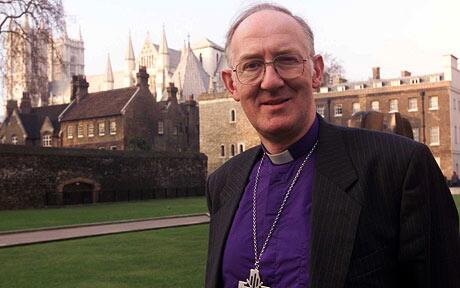 The big belly himself! What a horrible unkind man!

Bishop Scott-Joynt chose to be ordained as a Bishop and thus be pushed higher in the ranks of the oligarchy and political circles of the Government department, the Church of England.

This government department that does nothing for the government and very little for the people apart from the rich, still uses Christianity as an excuse to exist, and in this day and age, this guise is nothing short of astounding, because they divide the rich and the poor, call the rich sheep and the poor goats.

Bishop Scott-Joynt left me suffering in Jersey, allowed Jane Fisher to injure me and claimed she was helping me, over and over, as I asked her to be withdrawn, and refused to deal with my complaint in Jersey but allowed the Key-Warren-Lihou-Ey collaboration to villify me to absolve themselves of wrongoing.
He did not want or care about my side.

He allowed things to get unbelievably bad for me and did nothing about EY or FM and JM. He allowed them to villify me.
He liased with Jane Fisher to ‘cover up’ and ‘prevent scandal’ at my expense.

His actions in believing the collaboration and being dishonest and obstructive with me, is a classic example of how the Church of England rubbish the poor and are there for the rich and ‘their own’.

Bishop Scott-Joynt was the ‘fifth most senior Bishop in the CofE’ and this was constantly mentioned in the press, and yet, even by his own admission, he was struggling with Diocesan Issues, and was not doing well as a Bishop, and his wife often went on about him ‘ending up a Bishop’ and often implied he was not managing well.
Funny then that he chose to take this political position, if he was not suited to it and could not manage it, and managed so badly that he destroyed an abuse victim and, deliberately, slandered her throughout her home town and all homeless and support services so that she was left shamed, whipped, ruined by the terrible opinion he and his diocese gave to these services of her so that she was shunned and shamed and left driven out and long-term homeless, and still branded and shamed to this day.

This same Bishop told the court in Sussex that he and Jane Fisher had ‘Tried to help arrange housing’ for me in Winchester, even though everything they did was entirely without consent and what sent me mad, the constant violations which villified me, got their side accross and drove me, shamed, slandered and shouted at, from my home town of Winchester forever.

This man is a Christian? No, he is a politician, in a government department that has no real purpose any more, they do not represent Christianity, and misleading courts and police and homeless and support services with their side of things, while omitting my side, shows that very clearly.

Bishop Scott-Joynt is untruthful in the Korris report, claiming he was ‘disappointed’ with the meeting, he led the meeting and asked the questions, I simply answered him, so why was he disappointed with me answering questions he asked, all the while absolving the wrongdoers in Jersey, while stating that my abuser was supervised by people who were on his side?
It remains that the abuser holds positions in the Church, while Bishop Scott-Joynt has ruined me and branded me, he did not do the same to my abusers, in fact they have remained upheld and supported in the Church at my expense.

Thus the Church of England, with Micheal Scott-Joynt as an example, are purposeless and harmful to the poor and vulnerable.

It remains forever that I have been ruined and villified and given a record for reacting in distress to a terrible cover-up in Jersey, and the Korris report and what followed, was a cover-up of a cover up at the same time as a failed PR Stunt by the CofE, the ‘hug an abuse victim’ PR stunt that went very wrong.

I was used, after all they had already done to injure me.

And nothing whatsoever has been done about my complaints, after a year of being injured by the Diocese on top of what has already been done.

While I still have a criminal record at the hands of Jane Fisher and Micheal Scott-Joynt, while anyone can rape me and I will be treated as mad and locked up if I report it, because of the record I have been given, while the wrongdoers remain not suffering at all, it doesn’t matter how much boastful and vainglorious ‘good work’ the Scott-Joynts and Jane Fisher do.

When they meet God, they will not be treated kindly, although they wont be beaten and publicly branded when they face God, because Hehas no time for human evil, and what has been done to me is evil, God will be sending Scott-Joynt and Fisher to the lake of Fire, because it remains that they know their deceit to cover their backs and discredit me, they know the effects of making me out to be a mad bad stalker while I begged them to stop stalking me and violating my rights and privacy and dignity, they know I kept contacting them because of the injustices, and they had me damned as mad and bad.

Only a politician retires from service to God, a Christian does not, and if Micheal Scott-Joynt had ever been a Christian rather than a show-off politician, he would have dealt with my case before he retired or, he would have dealt with it when I contacted him after he retired.
He would not have misled courts and police about ‘only helping me’, because violating me and covering up was not help, it was violating me and covering up.

And to this day, neither he nor Jane Fisher are judged and condemned on this earth as I am, and because they have ensured I am lost and branded, and in all the cover-up of the past year, they have not been made responsible, they will face God, and they cannot possibly be allowed into heaven still carrying my blood on their hands, because they have left me worse than dead, trapped in the ‘in-between’ between life and death, with no quality of life, no hope, branded on record forever and thus unable to ever have quality of life again.

Just a Korris report footnote, the Korris report claims they used someone from Relate at the meeting, Lou Scott-Joynt was a Relate worker and this relate worker was also a friend of my friend Anne, who died estranged from me due to the diocese’s violations of the friendship and their use of JM! to forward emails of the Diocese’s side of things when I returned homeless to the UK.
Can you imagine, they used JM who had liased with the Dean and churchwarden to cover their and her and her husband’s wrongs, to send an email with the Diocese’s side of things, round to my old friends in the churches, damning me and the biggest injustice possible.
Anne died estranged from me, with me shamed and villified. I was on the streets, shamed, villified and cut off from my old friends, while everyone only knew bad things about me.
Scott-Joynt is a Christian? No.

Scott-Joynt and Fisher had me brutalized and detained weeks after Anne’s funeral, where Jane Fisher had tried to make me go and sit with Anne’s ashes in a cold dark church at night so that my abuser could go to Anne’s funeral in peace, and he was no friend of hers, he went to weddings, funerals and Chrsitenings to be seen and for the social. And Fisher used my reaction to this against me to the police, giving her side of Anne and my friendship which she and the Scott-Joynts had violated.
These are the things that no therapy can heal.

Anyway, back to using a relate counsellor who was friends with Anne at that meeting, that was blatantly a conflict of interests, this relate worker who was Lou Scott-Joynt’s colleague and my friend’s friend, and Bishop Scott-Joynt is claimed to have written to me to arrange the meeting, when in reality, and I have the evidence, which I will post, I asked for that meeting when the Dean called me wicked and said I wasn’t abused!
And the reality is that Bishop Scott-Joynt led the meeting and I asnwered his questions, so he has no right to be ‘dissapointed’ that I talked about the way I was being treated in the Jersey Deanery, when the meeting was called as an emergency by ME when I was called wicked by the Dean, who used JM and the Lihous as examples.
Christianity? Not what the church is about, deceit, lying, collaboration and wrongdoing, yes, that is what the Church is about.

How would Bishop Scott-Joynt or Jane Fisher like to be publicly flayed for all their wrongs and perceived wrongs, with their side omitted, when they are vulnerable and traumatized?
I don’t think they would like it, but they are strong, settled, well-off, not abused, and are able to cover, their perceived wrongs very well indeed, judging by Jane Fisher being able to jeer last year by referring me to the NSPCC in a continued violation of my rights after everything, including my complaint against her and my complaints to the police.

Because basically I am still dismissed as mad and bad, and until that changes and I am protected from the Diocese and their record against me, this remains a massive injustice and the only comfort I get is that Micheal Scott-Joynt with all his riches, rudeness and lack of Christianity, going to hell, as is Jane Fisher. And no amount of their airy-fairy defensive theology will change that.

A human being is trapped between life and death and in a non-life, and they are responsible and have not been held responsible on this earth as I have for all my sins and those of abusers and wrongdoers in the Church of England.

So, Bishop Scott-Joynt, the man who represents why the Church of England needs to go, so that the poor can find God too and so that hundreds of thousands of vulnerable people and children will not be abused by this government department and further damaged by the government department for being themseleves, while the wrongdoers are defended because of their money and status and the danger of ‘scandal’.

In the end, all Scott-Joynt and Fisher acheived was permenantly destroying me, which thye have made no effort to change, undo the damage with honesty and forgiveness, and I remain destroyed and thus, no matter what ‘Good Work’ they do, show off about, they will be going to hell, and they can and will rubbish that, but it remains the case.

Here again is my psychological report.

3 thoughts on “A birthday tribute to Bishop Michael Scott-Joynt”